Welcome to my web page!  This site would update more often, but I don't work on it as often as I'd like, so it can go many months before I mirror.  I do have the capability to mirror it on a schedule, but there isn't much point to doing so unless I have something to show for it.

The site is perpetually under construction, as I always seem to be changing the layout and graphics around; but since I only work on it as time allows, many parts of the site are still incomplete, lack CSS styling, or don't include JavaScript.  I also haven't tackled the To-Do list in forever, and it's getting longer all the time...

Feel free to peruse the Status/To Do page, which lists every page on the site, and their relative completeness and modification date, as well as the forementioned To-Do list.  You can also read the Change Log, which has details about every site update since 2006-Jan, when the site went live.  If you'd like a behind-the-scenes preview of the code, graphics, and/or page layouts I'm working on, you can have a look at the Test Hive (the graphics and code test page).

Questions or comments about the site or its contents may be directed to insectoid (at) budwin (dot) net; please put IWP: in the subject line.  I do appreciate feedback, both good and bad.  However, any spam mail will be subject to immediate deletion!

One of the biggest reasons for the significant lack of work on the website after 2012-Aug-31 is because that was the day my dad retired, after 33 years at Hewlett-Packard.  Ever since then, I have been under increasing pressure from my parents to seek employment myself; so far I've been unsuccessful, despite my CompTIA A+ certification (earned earlier this year).  So, basically, I've had to "look busy" doing more important things during the day.

Another significant loss of time came from the time I spent capturing, cropping, and converting graphics from various DOS games, which I intended to use in future pages here.  Most of these efforts were only partially finished by the time 2013-Jan rolled around.

2013 was a busy year, not least because I started using Facebook on a regular basis.  The first four months or so of 2013 revolved around celebrating the completion of the late Robert Jordan's epic fantasy series, The Wheel of Time.  The 14th and final novel, A Memory of Light, was released in mid-January, and I attended the signing at our local bookstore.  More importantly, though, was that I had arranged, with my parents' help, for me to fly solo to Atlanta in April to attend the fifth annual JordanCon, which is a gathering where WoT fans can talk and discuss and reminisce about the series, meet many of the people responsible for its completion (such as author Brandon Sanderson), and connect and socialize with other fans.  I met a large group of people I'd talked to online but never met (hi, Loonies!), and many of those I now consider friends.

I did spend time watching Doctor Who on-and-off for four months in summer/fall 2013... so that accounts for that missing time.  Throughout 2013 I did acquire a great number more DOS games for our collection, by download and/or purchase, and I took screenshots of each; few if any will get their own page here, as I still need to finish what I've started.

2014 is when I tried to get the ball rolling again.  In January I bought a VGA-to-RCA converter box, which lets you hook up TV equipment (such as VCRs, DVD players, and older video game consoles) to a computer monitor.  Since I have both DVI and VGA inputs on my LCD monitor, this gave me the convenience I needed to hook up our Super Nintendo and complete my Super Metroid text guide.  (Despite having to take a break for my A+ exams, and having my computer go on the fritz almost the same week.)

I tried my hand at simple 3D modeling in March, designing a version of "Insectoid XII" in several 3D CAD programs, then importing it into Inkscape and adding all the little details I wanted, like texture.  Lastly, I exported it as PNG and touched up the color a bit.  The smaller versions (used for my avatar) don't show the detail of the original very well; click on the image below to see the full-resolution PNG (hover over parts of the image for details). 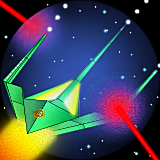 Anyway, I may build a page here around the making of this image, to go with the "making-of" section for the older 2D avatars.

In April I started and completed almost two-thirds of the Super Metroid HTML guide; it stood at about 63% complete when I took a break at the end of the month, but I never got back to work on it.  The 3-4 months since then have been sort of a blur, with us attending baseball games, having one of our cats put down, then my birthday in June (with hometown hero Tony Gwynn's passing 2 days earlier), then the July 4 festival (I am deputy photographer for my dad, Poway's current Uncle Sam).  I forget now what prompted me last week to start working on this again, but I've been wanting to for a while.