This site is actually the fourth that I've attempted; the previous one was written from 2001-2004, and hosted by the Yahoo! GeoCities site until its demise in 2009.  The two sites before that, written between 1998 (and possibly earlier) and 2000 (which was really just a re-write of the previous site, just as this site is of the GeoCities one), were both hosted by the now-defunct zNET ISP, and are both embarrassingly not-well-done.  (I was just a kid.  Gimme a break.)

The site was started in 2006, initially based on the Geocities site, but was eventually completely rewritten.  The main reason for the rewrite, of course, was because the older sites were created using Microsoft FrontPage, and thus had a lot of unnecessary code and inefficient inline styling.  There was also a brief period where I used frames pages from 2006-2009, which was even less efficient (with 4 times as many files to deal with!).  Therefore, in late 2009 I started rewriting the entire site using CSS stylesheets, which also provided an easy way, using div elements and fixed positioning, to make "virtual framesets" (or V-frames) starting in 2011.  Also in 2011, I started adding JavaScript functions to the pages, which provided a way to easily make the "tabbed page" look, as well as dynamic timestamps and a neat element-collapsing widget.

All current pages are written using the powerful cross-platform text editor Vim (an improved and open-source version of UNIX vi); specifically, the graphical version, gVim.  Its syntax highlighting and useful functions like substitution (using regular expressions) make it easy for me to write and format HTML the way I want.  In addition, gVim's tabbed editing feature makes it easy to have a group of pages (e.g., a whole section of the site) open in a single window.

The gritty details of changes since this site went live (if anyone cares) are in the Change Log.  You can also read the Status/To Do page, which details the relative completion of the pages here.  There are still many projects to finish (various re-coding efforts, the game guides, etc.), and many things I'd still like to do in the future (these are covered in the To Do list).

Questions or comments about the site or its contents may be directed to insectoid (at) budwin (dot) net; please put IWP: in the subject line.  I do appreciate the feedback, folks, both good and bad.  However, any spam mail will be subject to immediate deletion!

About the Graphics and Fonts

All of the graphics on this site, except for the game screenshots and a few other exceptions, are hand-drawn using various programs.  Older images (of which there is still a very large number: over 1,100!) were drawn in Microsoft Paint, and then converted to minimal-color GIFs using the free image manipulator IrfanView.  Newer images (over 1,000, and slowly replacing the older ones) are either PNGs created with Paint, or drawn as vector images in the open-source program Inkscape (similar in function to Adobe Illustrator), and then either used as-is or converted to PNG.  There are also certain cases, such as creating animated GIFs, when I use the open-source program GIMP (similar in function to Adobe Photoshop).

The fonts used in the banners and buttons are also custom-made, except for those used on the Descent and future Jazz Jackrabbit pages (which are adaptations of the fonts used in those games).  The banner font used on the root pages, with the blue fill and bright outline, was inspired by Tron.  The button font's letters are somewhat hexagonal in design, in keeping with the Insectoid theme.  The labels used for the blog logo and for the Change Log are in E780-Blackletter, a blackletter font I borrowed from Memorex exPressit, an old CD label-making program.

In the older areas of the site, where whole button images are still found, I used a system font (DOS), a Commodore 64 font (C64), a fixed-width 6x13 font (XPilot), and various sizes of the Verdana True-Type font.  Verdana, as it happens, is the default sans-serif font for this site, with Courier New used for monospace text, and Times New Roman for print (and for the blog titles).

I don't remember why I wanted the banner and page icons to be so large, but I think the layout looks good.  I recently improved the design of the banners on the root pages; previously, they consisted of small hexagons which in turn made up the larger hexagon shapes.  The new version has glowing (and non-glowing) lines which make up the large hexagons, as well as a colored hexagon behind the site title.

The "dragon" fractals in the background of the update pane are Heighway dragon curves that I generated with a freeware program called ChaosPro.  Why this fractal in particular, you ask?  Many years ago, my dad wrote a program on the Commodore 64 in the PASCAL language that would, with a special serial interface, draw a multicolored dragon curve on his old Hewlett-Packard 7580A drafting plotter, changing pens at a set rate.  That plot still hangs on our den wall to this day.  (And we still have the ancient plotter; whether it's in working condition or not we don't know, but someday my dad and I may fire it up and find out.)  I'm not sure how many iterations the plot is; I would guess that it's several more than the one here, which is 12 iterations.)

Oh, did you mean about me? 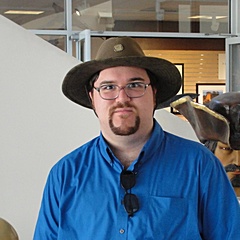 [Left] This is the best recent picture I could find of myself; it was taken in June of 2014, at the San Diego Natural History Museum in Balboa Park (hence the pirate looking over my shoulder).

I was born in San Diego, CA, USA in June of 1986.  I have been wearing glasses since I was 3 years old, when I was diagnosed with cataracts in both eyes (which is fairly unusual).  When I was 13 I underwent cataract surgery on each eye, and now have excellent vision with glasses.  I graduated from Poway High School in 2004, and attended Palomar Community College from 2004-08, though I never earned a degree.  (The jury's still out on whether I can get a decent job.  Only time will tell.)

My main area of expertise is computer hardware and software, repair and troubleshooting, with a partial knowledge of Computer Science (I'm still learning C), electronics, and Web design.  I'm fairly technically-savvy in many other areas, as well.  Among my hobbies: playing old-school computer and video games, reading science-fiction and fantasy novels (and, by extension, participating in various blogs on Tor.com), listening to classic rock music1, sketching, building with Legos, building small electronic projects, collecting gems and minerals, and collecting coins (both US and Great Britain). 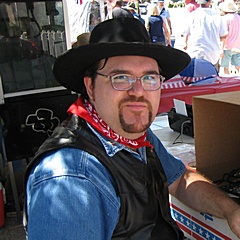 Other than that, I read and share things on Facebook, read and comment on various Web comics (someday, maybe I'll share my reading list), play with our cats (2 at the moment; someday I'll have a small photo gallery), watch Doctor Who, and do my best to keep my computers (and my family's) in good working order and the software up-to-date (basically, everything the Network Administrator—Dad—does not do).

Oh, yeah... and then there's the thing where I spend an entire day taking photos of Uncle Sam (my dad) at the annual Old Poway Park July 4th festival.  It's a complicated but very efficient system, involving an HP Mini netbook, three HP photo printers, a remote-controlled pan/tilt mechanism, a Wi-Fi-controlled Canon camera, some ingenious scripting and software image manipulation, and an improvised cowboy costume [photo at right].  (You can see some sample photos from the last two years on the website.)

1 – Most of the music I listen to was recorded before I was even born; unusual for my age group.  (I consider myself sort of a "generational outcast", as far as music taste goes.)  I do also like classical music and Enya, when I need something relaxing to listen to.  (And the Ventures; they're good for many occasions.)  My classic rock collection has grown quite a bit in the last 10 years, especially in the last year-and-a-half.